The Further Adventures Of Indiana Jones #13 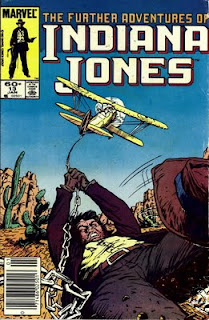 The Further Adventures Of Indiana Jones was published by Marvel from 1982-85, 34 issues total. It was a generally fun series that captured the feeling of Raiders Of The Lost Ark (the only "Indy" movie released at that point). The series featured work by comics luminaries like Denny O'Neil, John Byrne, Terry Austin, Steve Ditko, David Mazzuchelli, Archie Goodwin, Herb Trimpe, David McElinie and Jackson Guice. Dark Horse currently owns the rights to the reprints of these stories, you can buy them here if you're interested. I e-mailed Brown about AEM last month, he was kind enough to write me back. He mentions this issue of Indy:

"I could not interject myself into an Indiana Jones Adventure or a Star Wars episode. Even comics has rules about time, space and realities... well, you know! It was probably Louise Jones, an unsung genius of comic craft-- who was also my boss at the time, who suggested I tell an associated story. And that worked out very well for Indy, Star Wars and even the X-Men-- which was right in the middle of some galactic space opera"

So, just like AEM's Star Wars issue, Brown shows up at the end in a one-page story titled Massachusetts Brown:Raiders Of The Late Book. 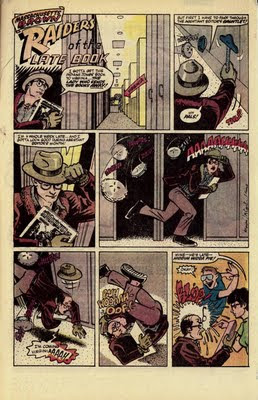 It was written by Brown with art by Brown and Mike Carlin.
Let's break down the story:

Brown is trying to deliver the new issue of Indiana Jones to Virginia Romita, Marvel's long-time Traffic Manager (and also wife and mother of John Romita Sr. and Jr., respectively). His fellow Assistant Editors are preventing him from getting the book to her on time by throwing pies at Brown! Instead of Indy's whip, he only has a T-square to defend himself. 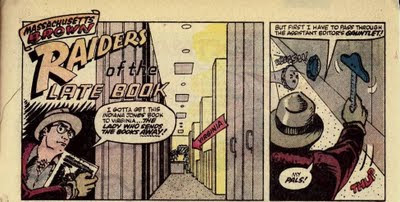 Brown is already running late and wants to make a good impression while the regular Editor is away. 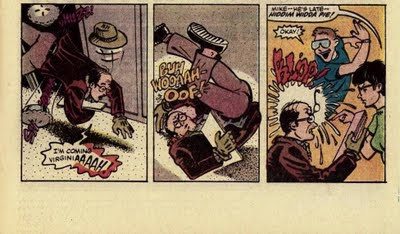 That ends another installment of AEM Online, I want to thank Eliot R. Brown for writing me about this issue, and thanks to him and Mike Carlin for a nice little Indy parody!