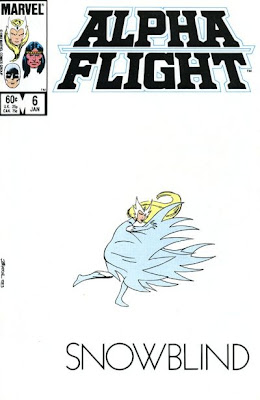 
Note:
This issue has been reprinted in a trade paperback called Alpha Flight Classic Vol.1.  Since it's readily available in a nice, glossy book format, I won't be featuring many scans from the issue.

Let's take a look at "Snowblind", written, penciled and inked by John Byrne.  The Assitant Editor for this issue was Linda Grant.

Corporal Anne McKenzie (better known as Snowbird of Alpha Flight) of the Royal Canadian Mounted Police is being disciplined by her superior.  She's made a nasty habit of disappearing from her post, since she's often called away when she needs to help Alpha Flight.  When asked to explain her absences, she can't, because she doubts they'll believe her.


McKenzie is confined to a cell.

Nearby, oil workers are working on a well.  A worker named Thom says that the land is sacred to his people and drilling there could lead to disaster.  Thom's pleas are ignored.  Their efforts accidentally awaken Kolomaq, the Great Beast of the Snow!  He can control the snow, ice and temperature. 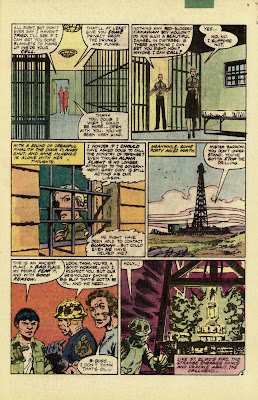 Their efforts accidentally awaken Kolomaq, the Great Beast of the Snow!  He can control the snow, ice and temperature. 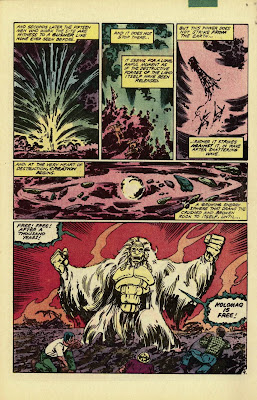 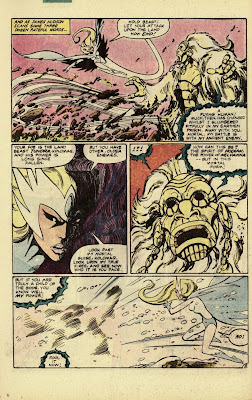 He creates a blizzard around them, rendering Snowbird...snowblind, as the title would indicate.  Snowbird counters by using her shape-shifting powers to  transform into a white bear.  She attacks Kolomaq, this is what it looks like: 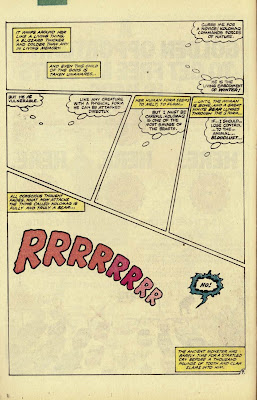 It goes on like this for several pages, as Snowbird changes from white bear to white owl. 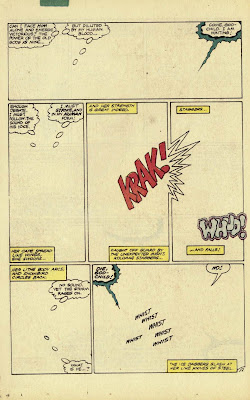 Eventually, Snowbird defeats Kolomaq and buries him under rubble.

I want to acknowledge the contributions here from letterer Michal Higgins.  You can almost see the battle due to Higgins' action-packed words in the "blizzard" panels.

I know some readers didn't like the "blank" panels, but I've always thought they were funny.

At the end of the issue, we get this "message in a bottle" from Linda Grant.  It's drawn by legendary artist Marie Severin. 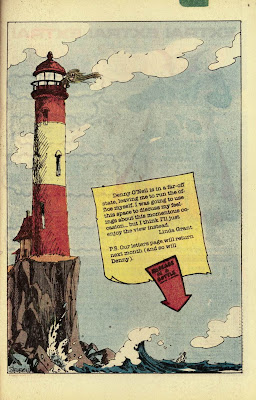 That's all, for the rest of the story, pick up the aforementioned Alpha Flight tpb.

Let's take a look at the cover.  It's got the "beware" of AEM stamp. 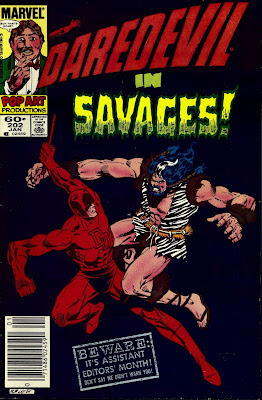 In the corner box, instead of Daredevil, we get a frightened Foggy Nelson commenting on the cover action.  Also, the "Pop Art Productions" caption is a reference to Marvel's brief name change in 1965.  They were trying to cash in on the Pop Art movement of the 1960s.

There's nothing unusual about the main story.  But it is important since it introduced Micah Synn.  He's mostly forgotten now, but Synn was a major player in the Daredevil series for most of the next year. 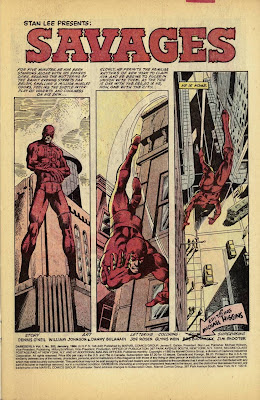 Let's zoom in & take a closer look at the credits:

Higgins has not only scribbled over the name of regular editor Bob Budiansky, he's spelled "editor" incorrectly!
This issue requires a little background, since some of the jokes and references are even more "inside" than usual.  It features an obscure Marvel character named Dirk McGirk.

Dirk McGirk was created by Mike Carlin in the pages of Crazy magazine (a Mad magazine knockoff published by Marvel in the 70s & 80s).  Dirk's "homework assignments" were often featured in Crazy.  Here's his "book report" on Mary Shelly's Frankenstein, (from Crazy #86): 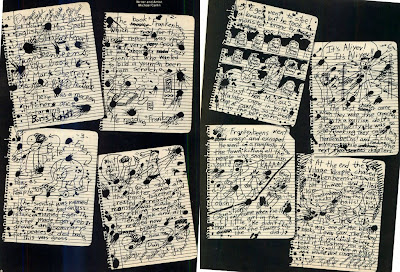 We also see Turk Barrett in this story.  Turk was a prominent supporting character in Daredevil at the time.  Turk first appeared in DD#159 (it was later retconned that he first appeared in #69, but I always thought that was silly,since the "Turk" in that issue hardly resembles the later character), he had already appeared in 18 issues of the title when this issue was published.

Turk was a low-level hoodlum who often tried to get on the Kingpin's good side.  He was a bumbling baddie, usually used for comic effect.  Turk also frequently served as an (unwilling) informant for Daredevil.  Interactions between the two often ended with Turk going through a window.  Even though he was a bad guy, I always felt sort of sorry for Turk, not to mention his equally hapless sidekick Grotto.

Which brings us to our featured story, "A Life In The Day". It's written by Mike Carlin, penciled and inked by Luke McDonnell.  Their names (and the rest of the credits) are written under the crossed-out names of the usual creative team. 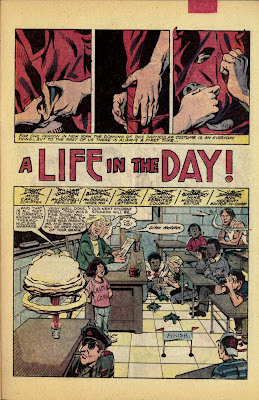 Suddenly, the classroom door flies off its hinges into the room, with Dirk on top of it.  He's wearing a homemade Daredevil costume.  He says that Dirk couldn't make it to class, but his friend Daredevil will present on Dirk's behalf. 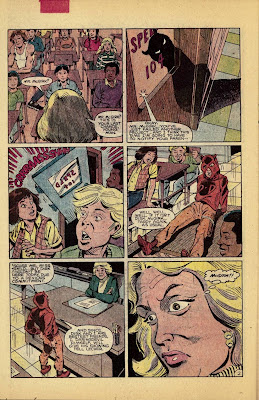 "Daredevil" gives a brief summary of his career and the villains he's fought.  It's accompanied by drawings of DD's villains, such as Electro, the Owl, Bullseye, Elektra & Black Widow.  Dirk, er, Daredevil seems to get "Electro" confused with "Elektra". 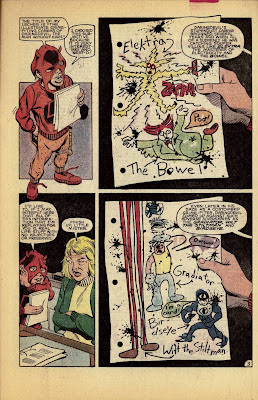 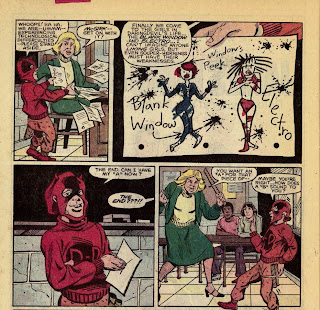 Miss Speld is NOT amused.  When Dirk lobbies for an A, it looks like Speld will "grade" his presentation with her ruler!  But suddenly, someone comes crashing through the window. 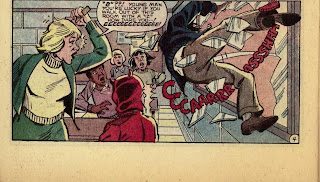 It's Turk! He's a bit dazed, when he sees Dirk, Turk thinks he's the real Daredevil. 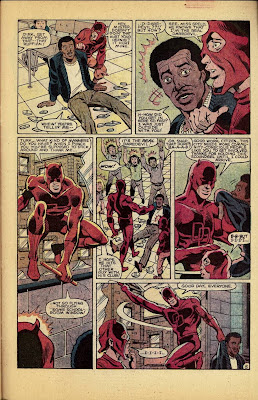 Then Daredevil shows up.  He thanks Dirk for "holding" Turk until he arrived to pick him up. Miss Speld decides to cancel class, since Daredevil made such a mess in her classroom.  Dirk gets an F for his presentation, but he's treated like a hero because of his interactions with DD, carried on the shoulders of his classmates.  The End.

As far as I know, this is the last time Dirk McGirk is seen or mentioned in comics.  As a fan of Crazy, I'd love to see Dirk revived someday.

Thanks to Mike Carlin, Luke McDonnell and Michael Higgins for another fun-filled AEM story!