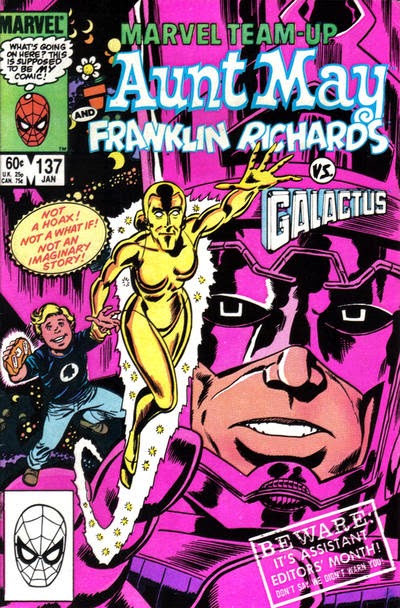 (Note from J.A. Morris:Sorry it's been nearly two years since my last update.  All I can say is "life happens", but I promise to do better this year.)

Hello again everyone.  It's been said that if you have to explain a joke, it's not very funny.  But sometimes, that's not true.  This joke of a story requires a bit of an introduction.

During the 1970s and early 80s, comic books often contained ads for Hostess brand snack cakes that featured Marvel Superheroes.  The "stories" took up only one page and usually involved a criminals being apprehended because the hero distracted them with Hostess Twinkies, Fruit Pies, Cup Cakes, etc. 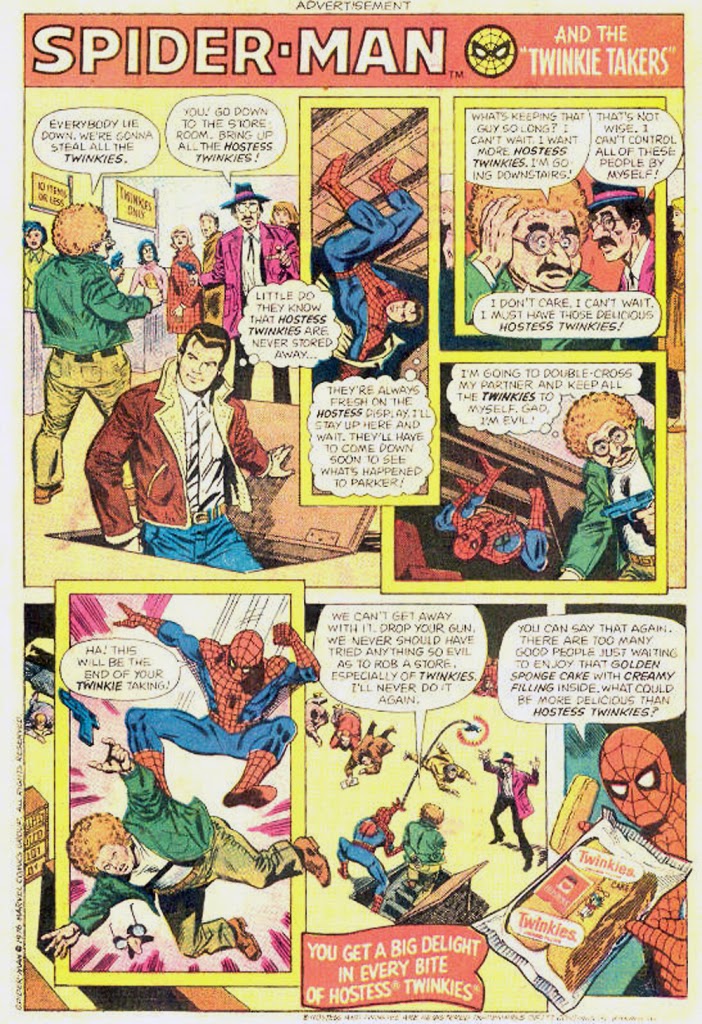 Now, on with the show:


Galactus, ravager of worlds, consumer of planets, is feeling weak and hungry.  He needs a planet to consume that will sate this hunger.  His herald Nova is flying around space, looking for a planet.

But Nova is killed when a planet called Tumbla V blows itself up so that Galactus can't feed off them. 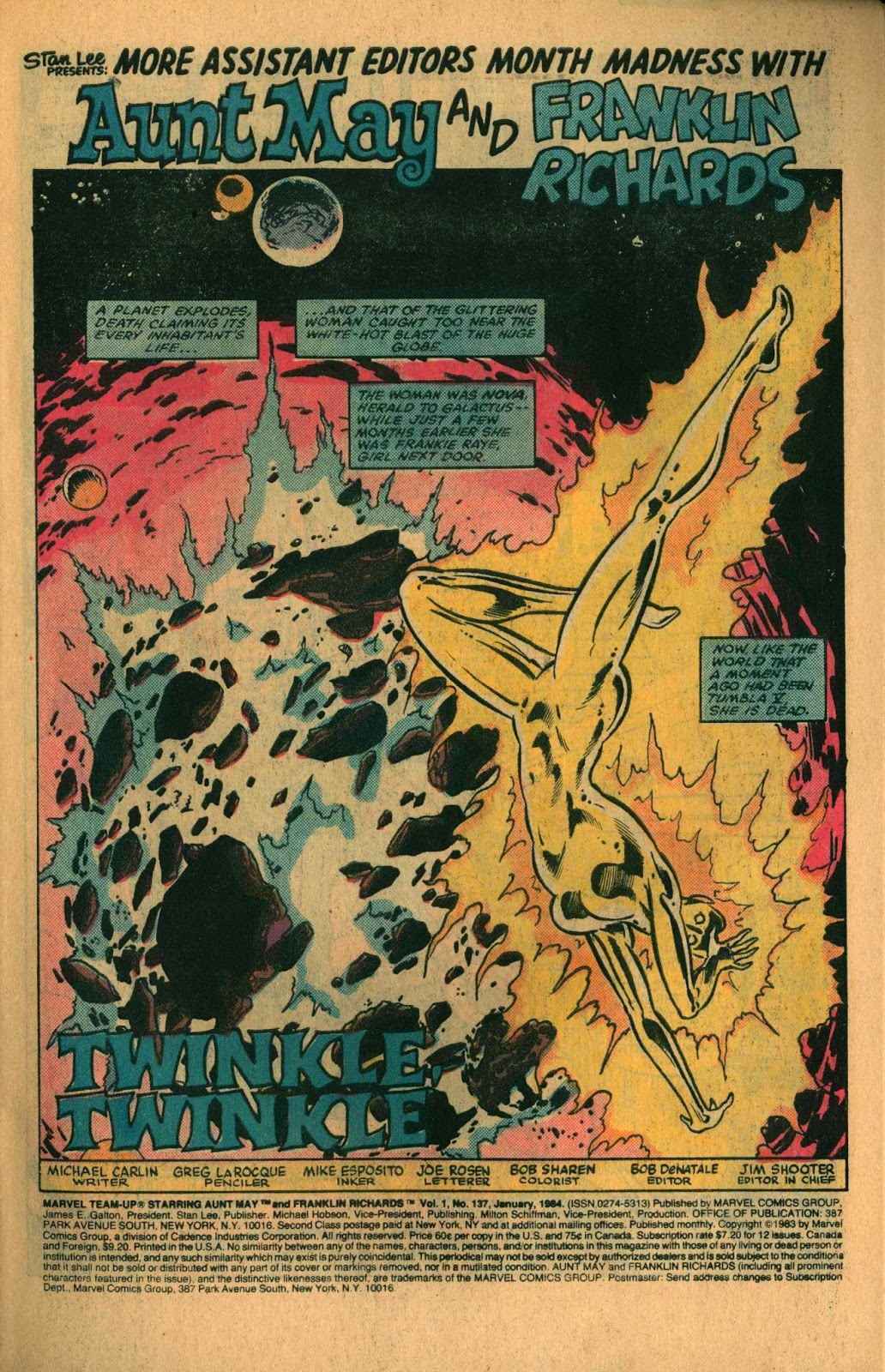 Galactus is angered by the loss of his herald, and by the Tumblans' "collective suicide."  His "insatiable need for nourishment" causes him to set a course for Earth.


On Earth, at that very moment, Peter Parker and his Aunt May are attending the Ringling Brothers and Barnum & Bailey Circus at Madison Square Garden.  Peter is uncomfortable, since May has invited his ex-girlfriend Mary Jane to join him.  The Parkers are seated right next to the Fantastic Four and the Richards' son Franklin. 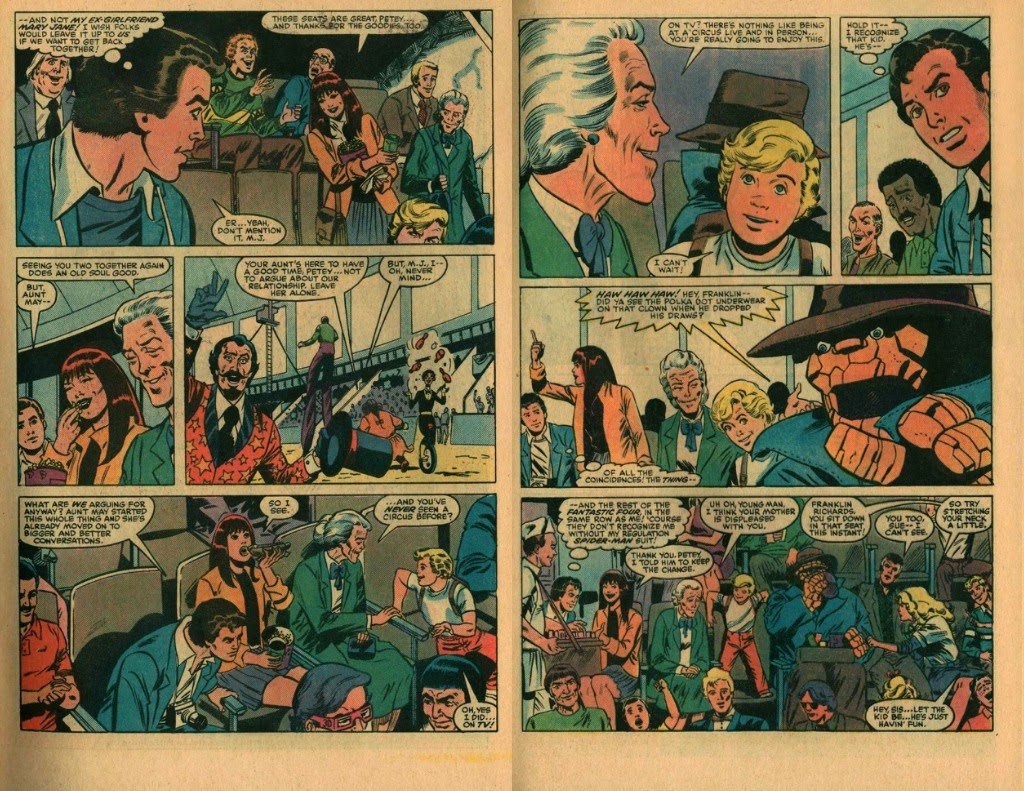 The FF see a newspaper article that reports on an incident in San Diego.  The heroes determine that they must head to the West Coast to investigate this, Spider-Man asks if he can accompany them. 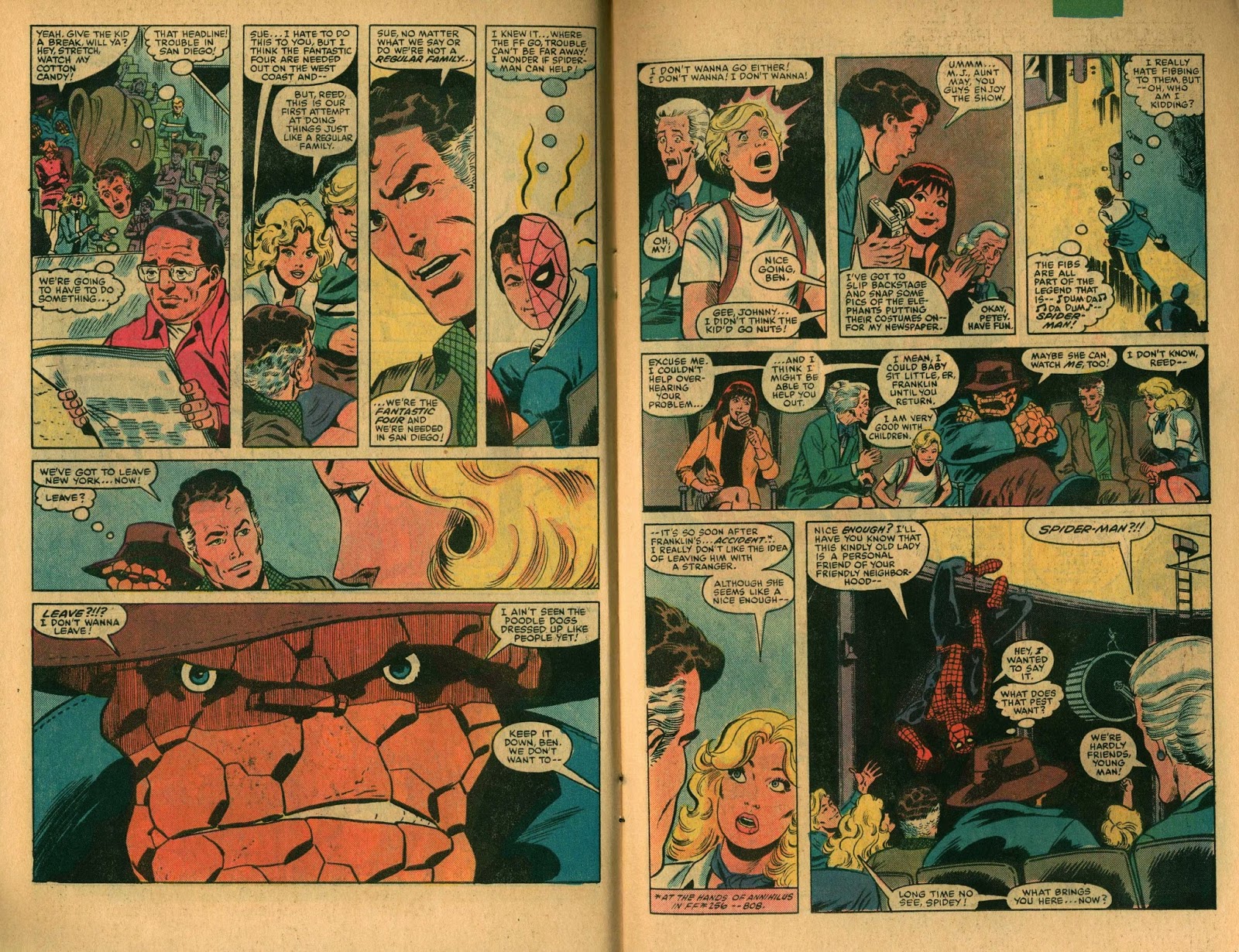 Franklin asks if he can stay and watch the circus.  Aunt May offers to take care of him, Spider-Man vouches for her, and the FF agree. 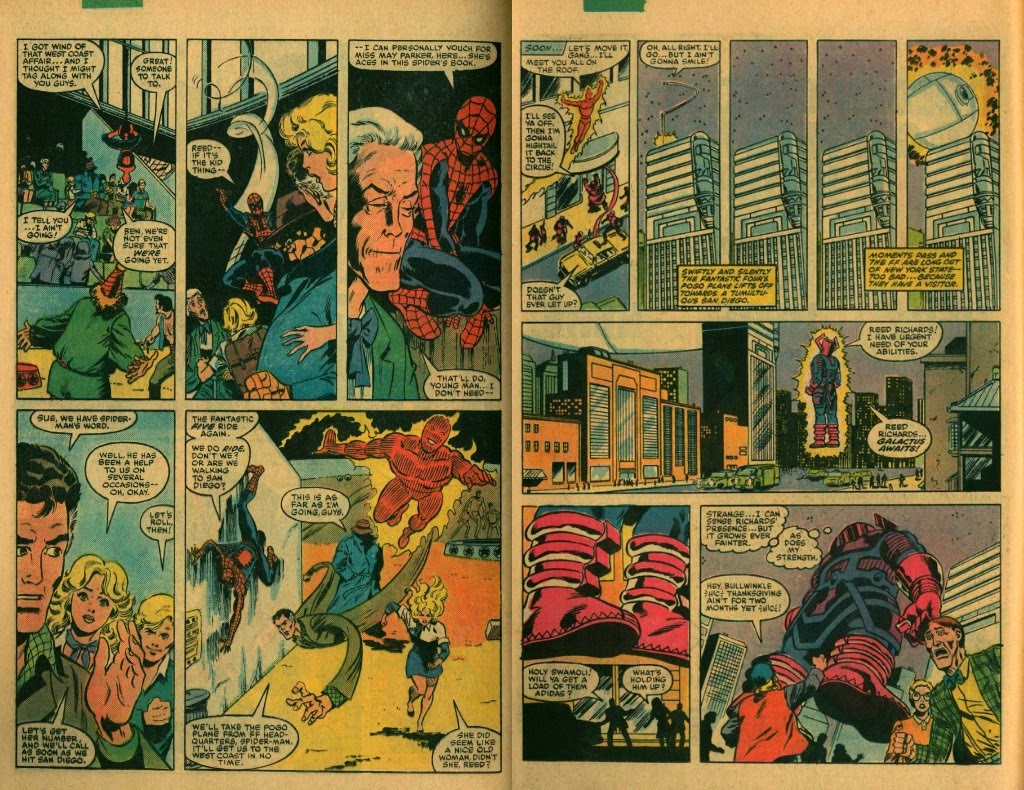 He can sense Richards' presence and goes looking for him.  Galactus tears the roof of Madison Square Garden and scares away the spectators, with the exception of May and Franklin 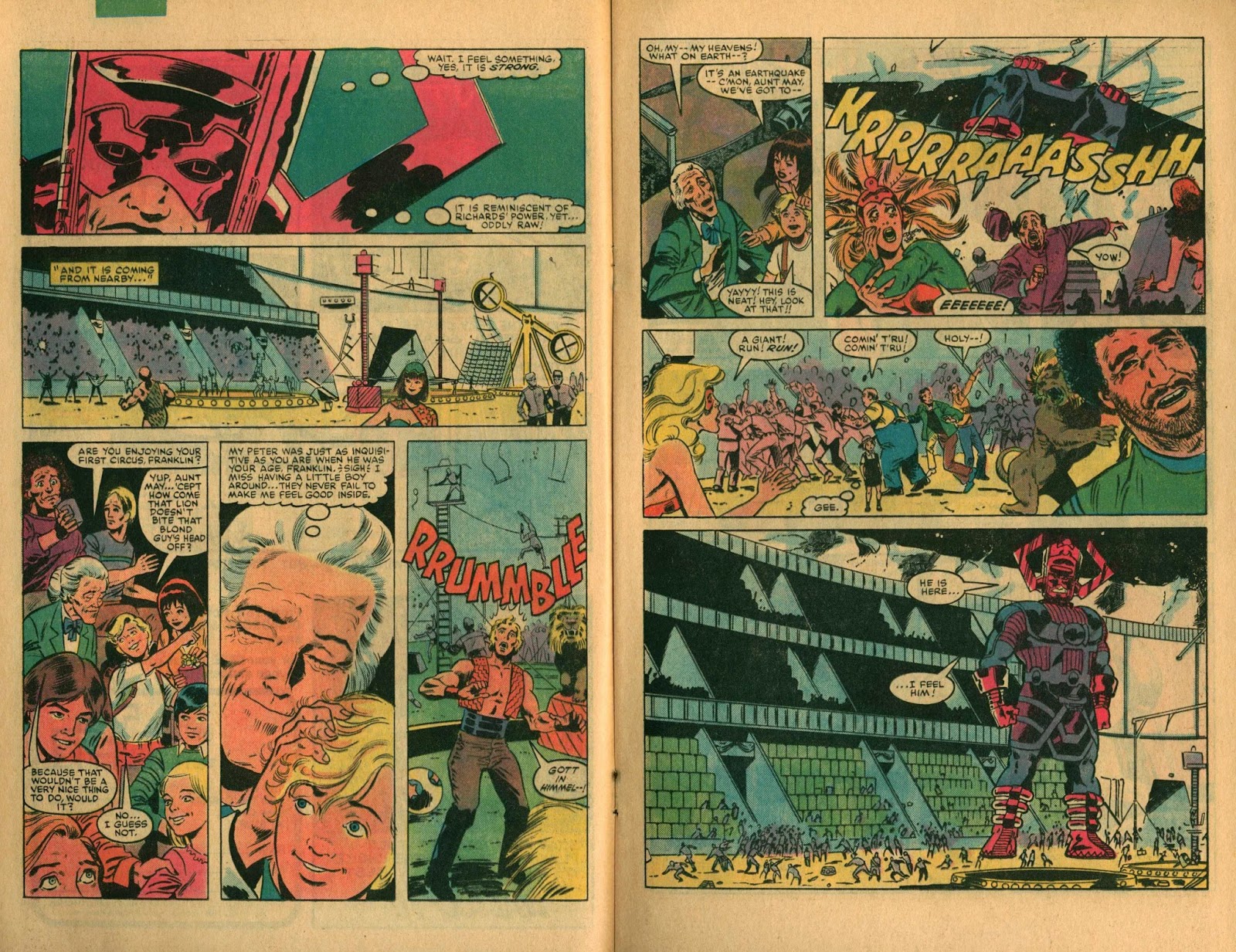 Galactus needs a new herald to replace Nova.  He senses the raw power in Franklin and zaps him with eye beams that will give Franklin the Power Cosmic.  But Aunt May gets in the way and becomes the herald instead!  May announces that she will be known as Golden Oldie!

When Galactus says that he "hungers", Franklin offers him a Twinkie...I mean a Twinkle snack cake. 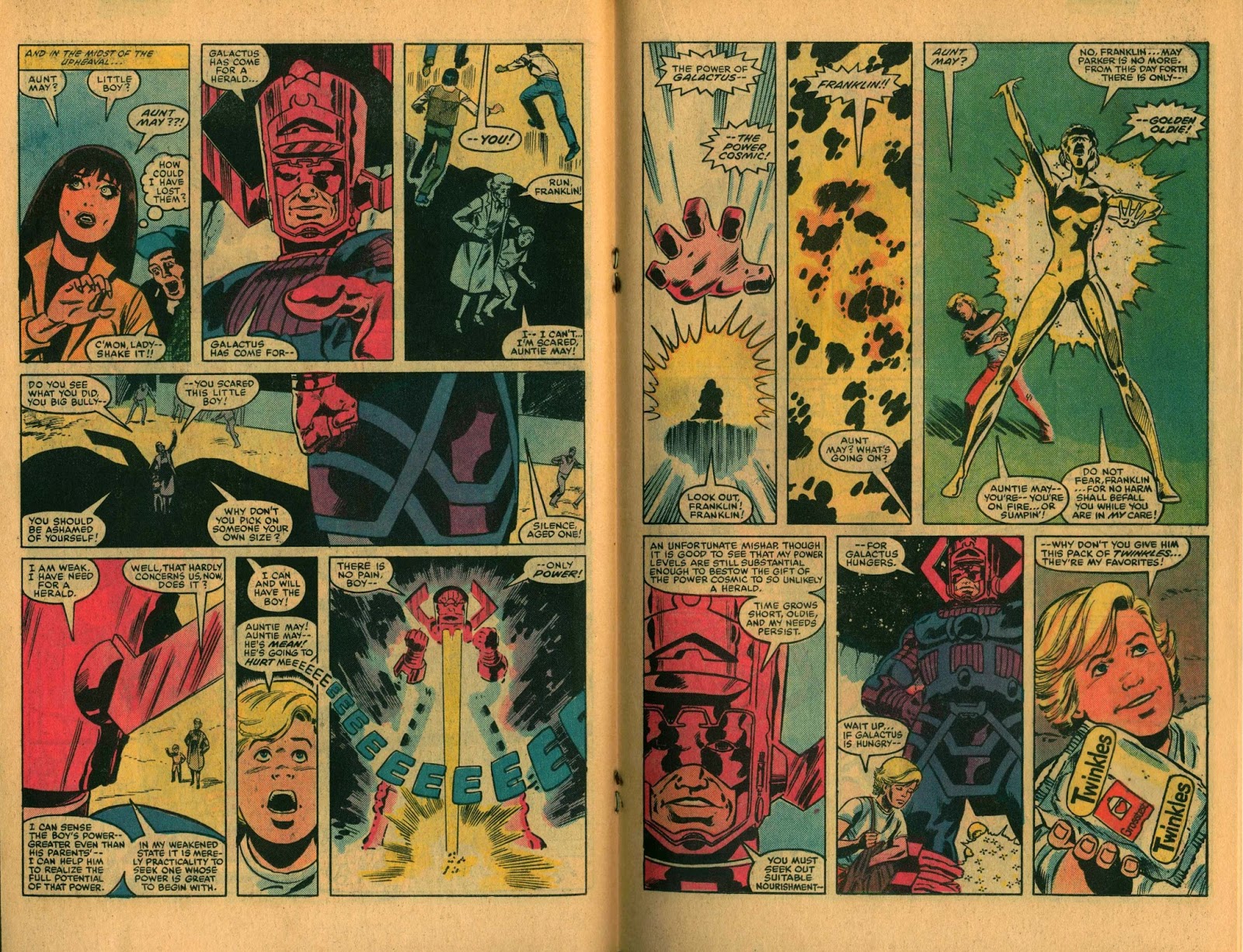 The Devourer of Worlds consumes the Twinkle and is pleasantly surprised to learn that "there are energies within the morsel that replenish" his "hungering system."  He wants more Twinkles, so his new herald goes in search of the snack cakes.  Golden Oldie cleans out the snack bar's supply of Twinkles, but Galactus still needs more. 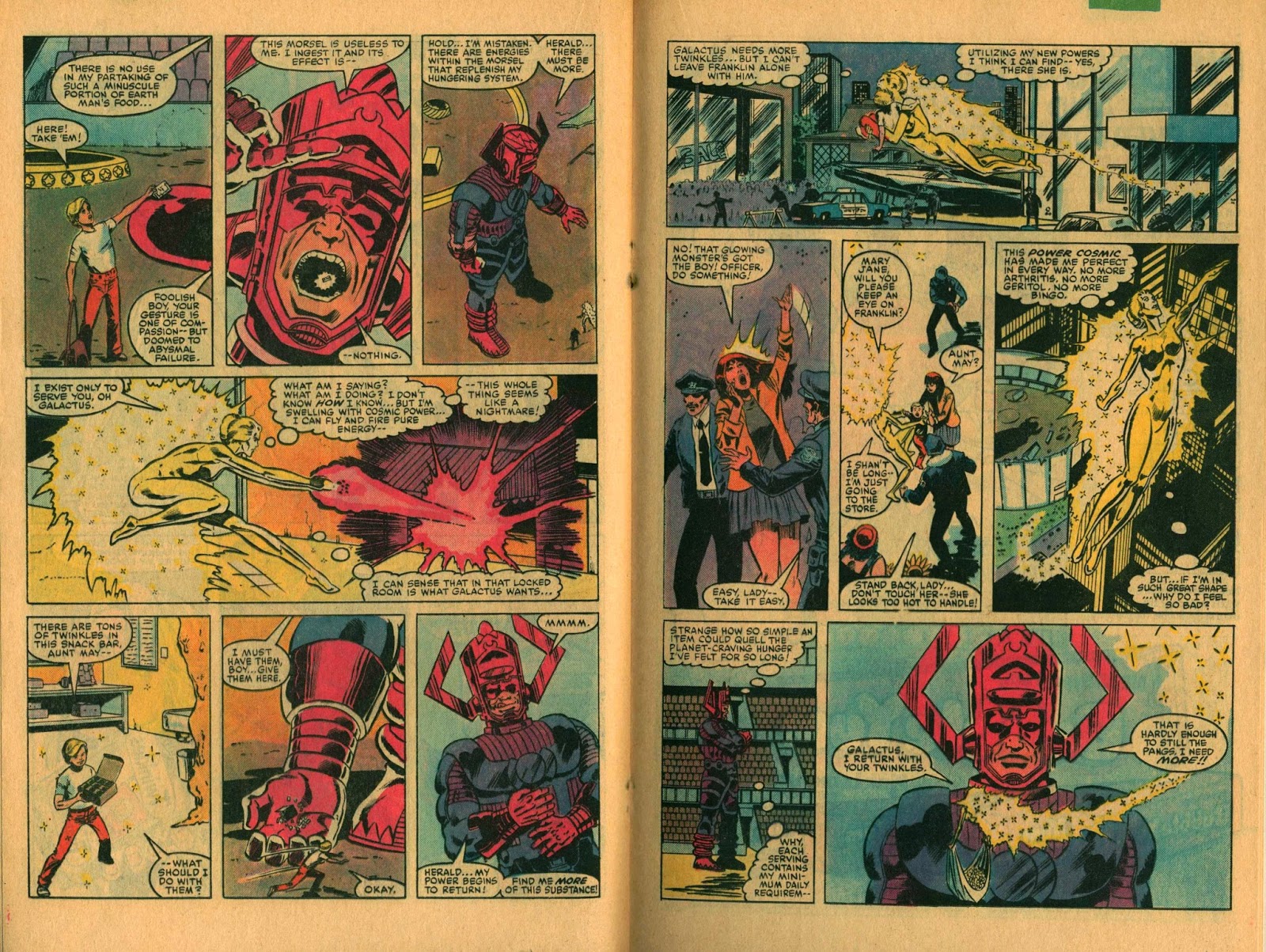 Golden Oldie flies to her former home in Queens.  Nathan Lubensky asks if she is his wife May, she replies "I think so."  Nathan asks if May can turn him and their friends into what she has become, May says he doesn't want that. 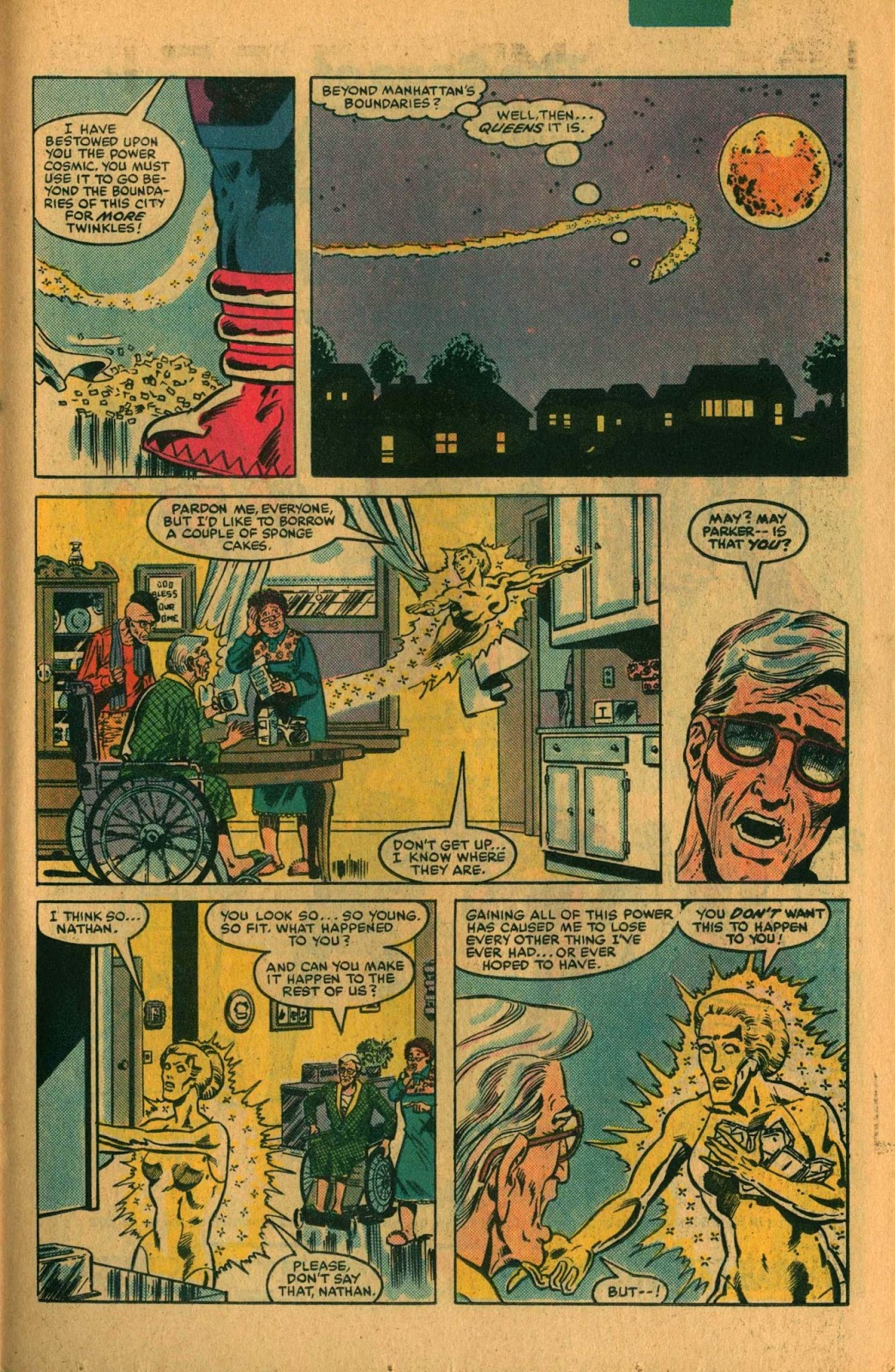 As she flies away, Nathan thinks to himself that he has nothing without May in his life.  It's a very poignant moment in an otherwise silly story, a nice touch by writer Mike Carlin.

Golden Oldie flies all over the world, collecting every Twinkle on the planet.  But that's still not enough to sate Galactus' hunger.  He dispatches his herald into space to find a planet to consume. May seeks a planet that contains no lifeforms.  She finds one that is a giant, planet-sized Twinkle!  Golden Oldie summons Galactus to consume the cream-filled sponge planet.  But a space-dwelling being (who bears a remarkable resemblance to a certain Pillsbury mascot!) intervenes and tells May that the planet is his creation and is off limits to her.  Thankfully for May, Galactus arrives and the "Doughy Boy" (as Golden Oldie calls him) bows before Big G and says he made the Twinkle planet as an offering to Galactus. 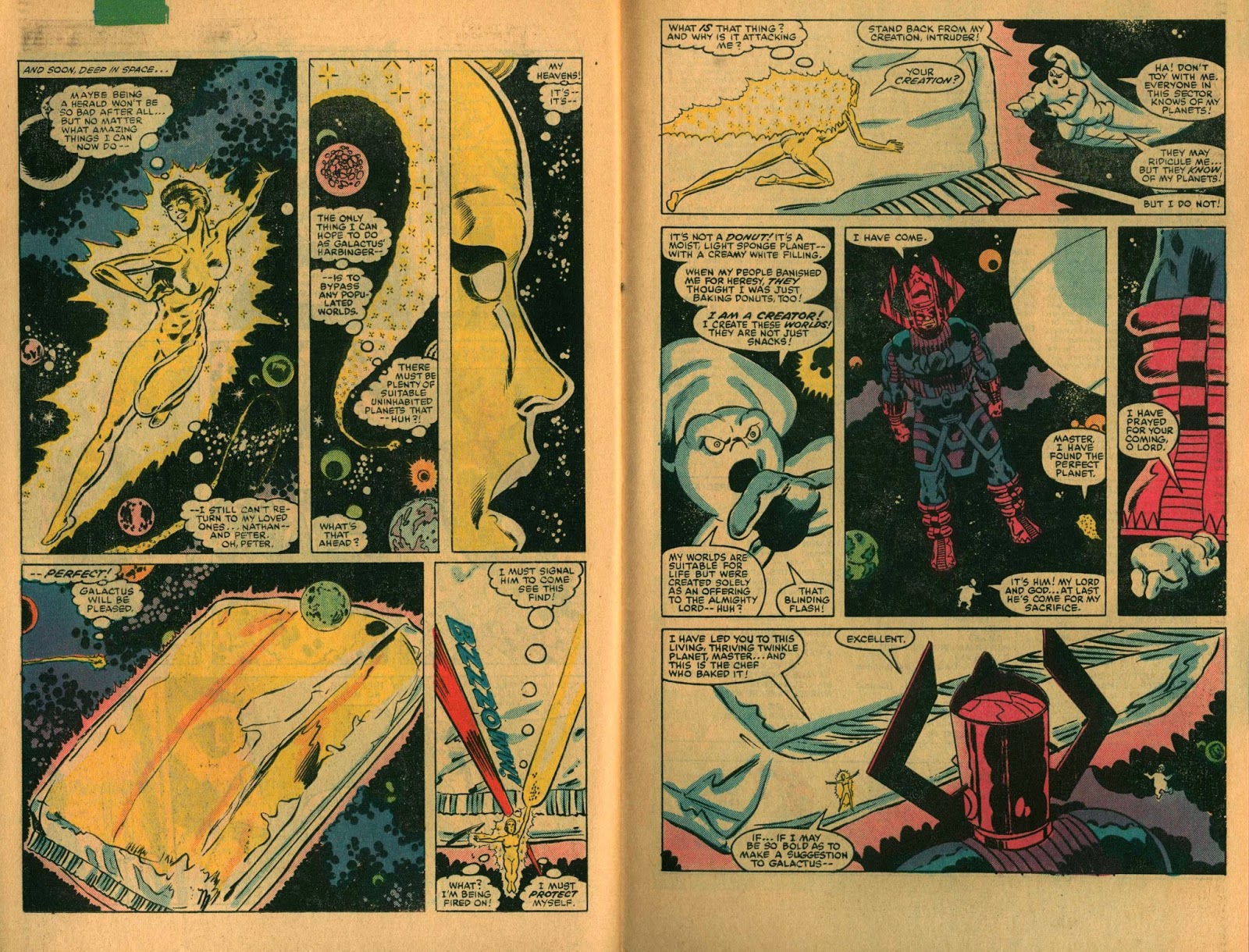 Golden Oldie suggests that Doughy Boy would make a great herald for Galactus, who agrees with her.  Doughy says he would be honored and will gladly create "an endless supply of cream-filled planets.  Galactus will never have to consume planets with lifeforms again!

May is free from her service to Galactus and flies back down to Earth.   She is greeted by Franklin and MJ.  Using his super-powers, Franklin absorbs the power cosmic from Golden Oldie, turning her back into May Parker. 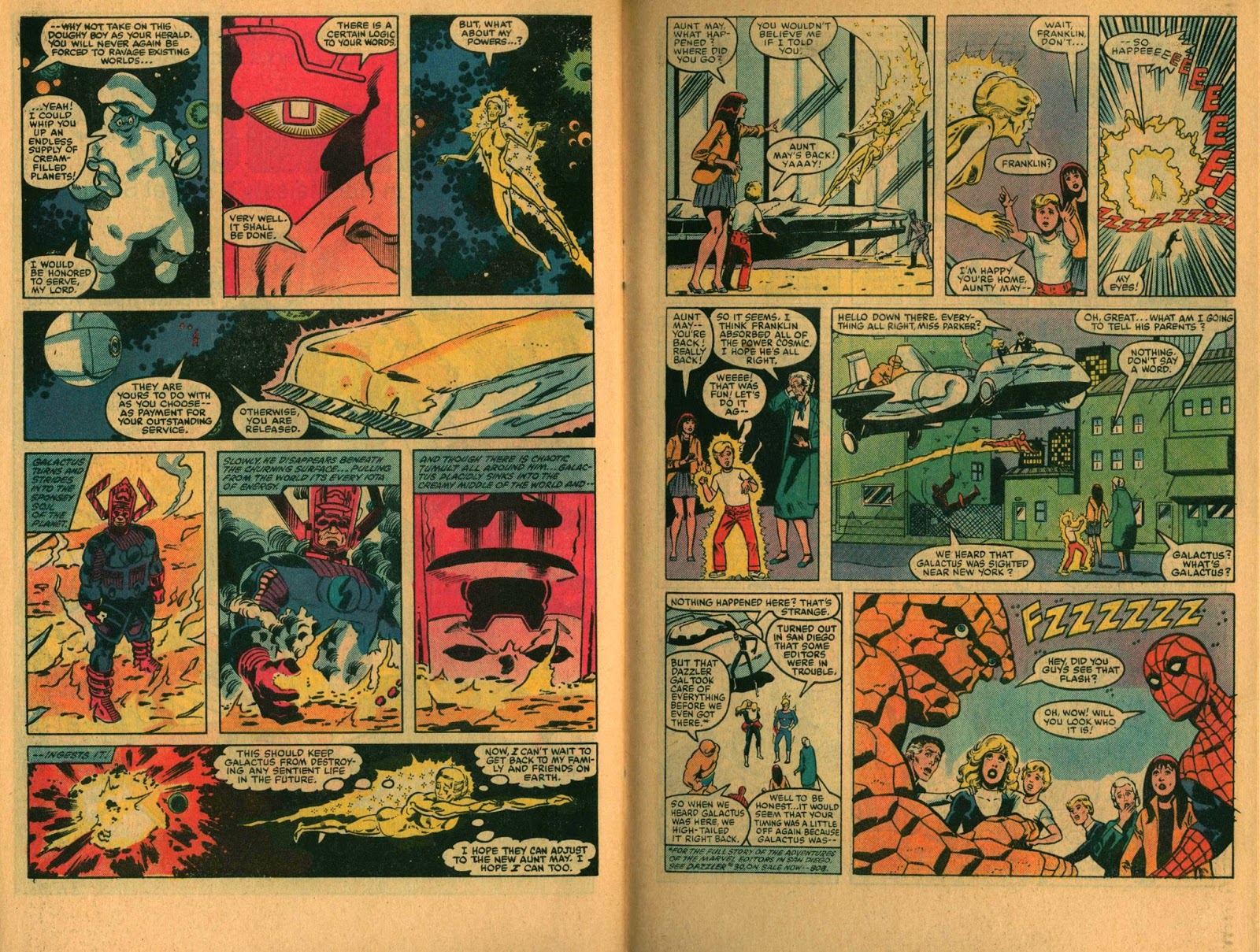 Spider-Man and the FF return, just in time to miss everything that happened.  But Galactus reappears and asks if the heroes can help him wash down the Twinkle Planet! 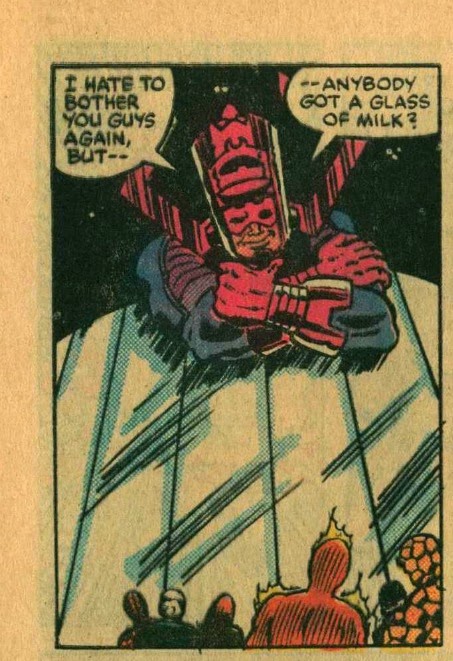 The story ends with the revelation that was "not a hoax, not an imaginary story, not a what if."  It was Peter Parker's nightmare, caused by a late night snack of Twinkles! 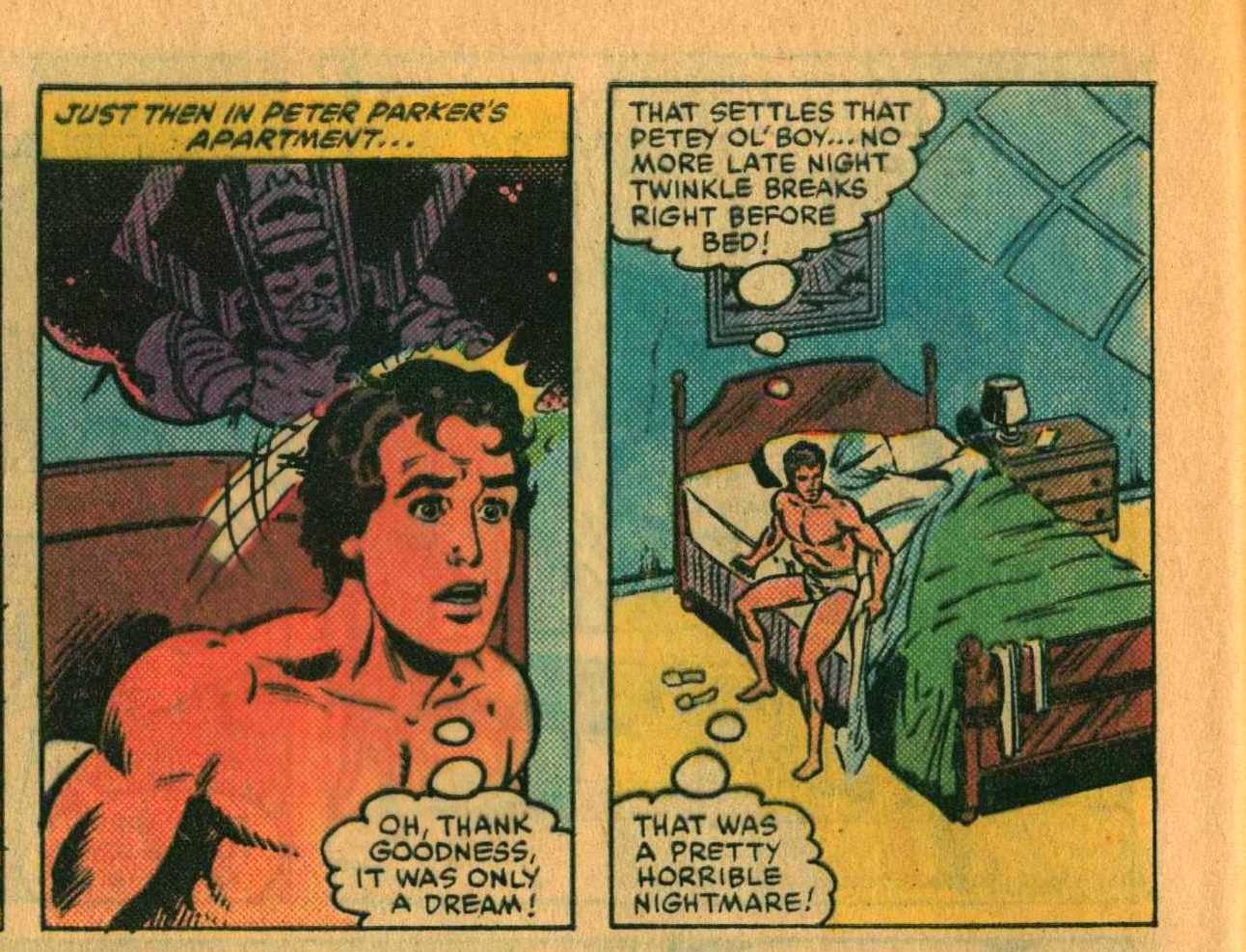 But it turns out Parker's dream was a dream within "absent" editor Danny Fingeroth's dream! 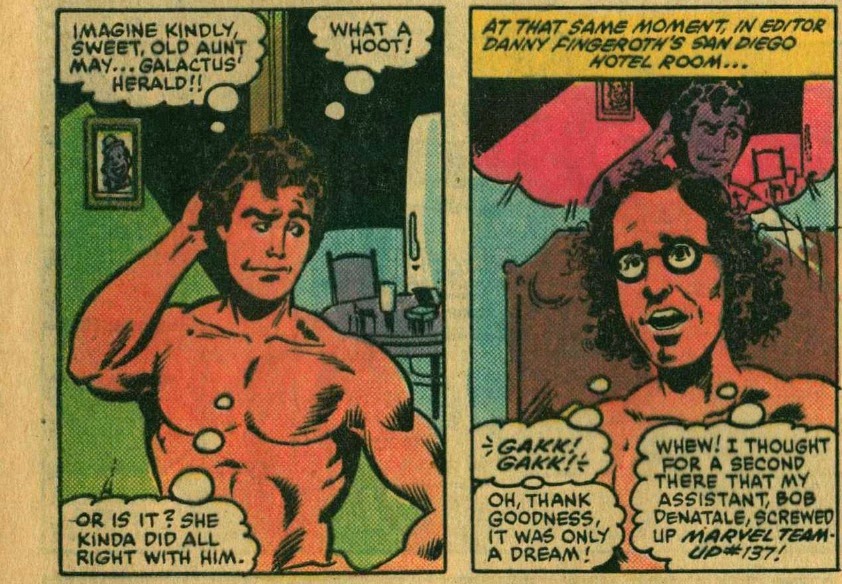 Fingeroth is relieved that his assistant editor Denatale didn't approve the Galactus story.  But then we see that Fingeroth's dream was part of Editor in Chief Jim Shooter's dream. 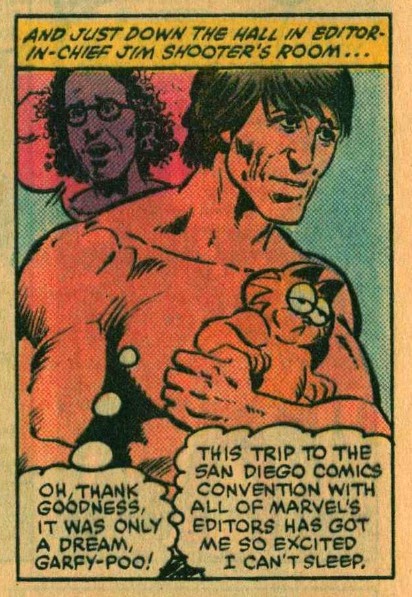 ...which was a dream within publisher Stan Lee's dream... 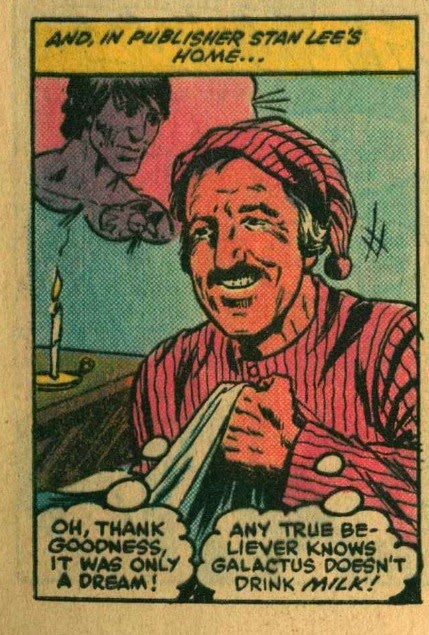 ...which was a part of Galactus' dream! 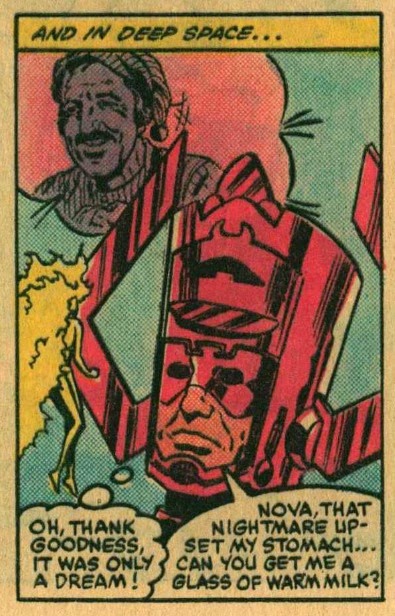 And readers of Marvel Team-Up are very glad to find out it was just a dream! 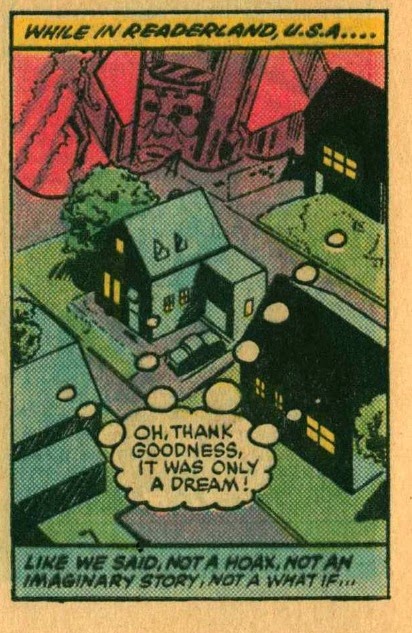 Marvel Team-Up #127 ends with the letters page, which includes a column from Bob Denatale that explains the back-story of "Twinkle, Twinkle." 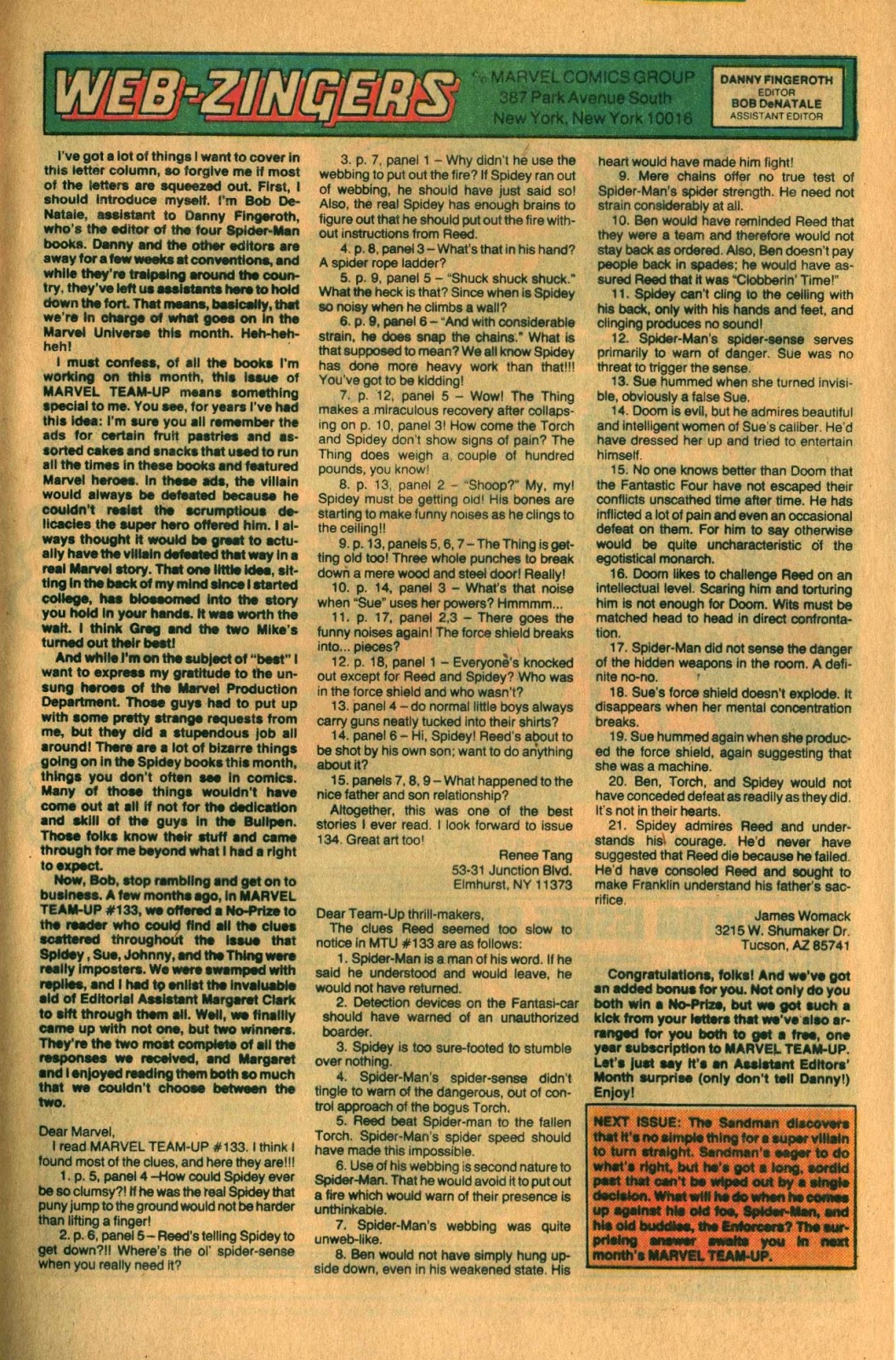 Thanks to Mike Carlin, Greg Laroque, Mike Esposito, Danny Fingeroth and Bob Denatale for producing one of the most memorable stories ever published by Marvel Comics!