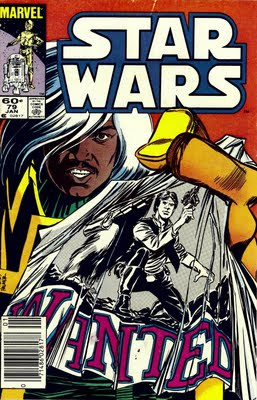 (Disclaimer:'Star Wars', it's characters, names, and other elements are the sole and exclusive property of Lucasfilm Limited.)

Star Wars:The Assistant Editor Strikes Back
It is a dark time for Star Wars fans.
Return Of The Jedi has come and gone from most theaters.
Darth Vader is dead and there are no more Star Wars movies for the foreseeable future.
Many fans were disappointed in the last chapter of the trilogy.
The next novel is 8 years away.
But suddenly, a new champion of The Force appears….
Eliot R. Brown!

Today we look at the Star Wars issue that came out during AEM.
Marvel published a series of Star Wars comics that ran from 1977 until 1986. The first 6 issues adapted the first film, after that we got original stories featuring Han, Luke, Leia, et al.  The series varied in quality from great to "what were they thinking" but it was usually a lot of fun. Lucasfilm exercised strict control over the series most of the time.  For a long time it was the only thing remotely resembling an "extended" universe beyond the movies.

Let's take a look at Star Wars #79. We get a good, typical space-opera story here, no funny credits or oddball plot.  But I love the Han Solo/Harrison Ford caricature on the splash page.  Nice work here by penciler Ron Frenz and inker Tom Palmer: 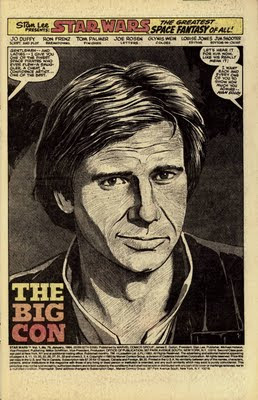 At the end of the issue, we get a one-page strip featuring another appearance from Assistant Editor Eliot R. Brown (who wrote and drew the strip), who we met back in the first post of 'AEM Online'. 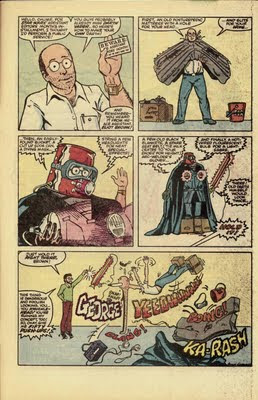 Let's take a closer look at this strip: 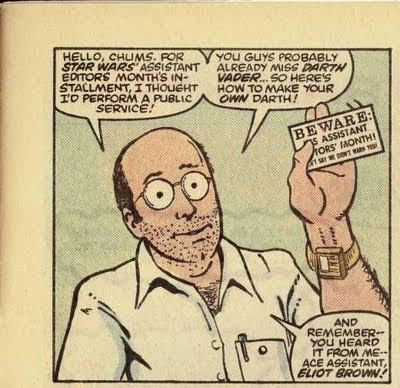 Brown offers to show the readers how to make their own Darth Vader costume. 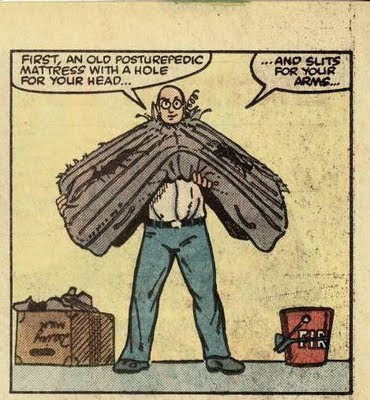 He begins with some typical household items, but then it starts getting bizarre...and dangerous. 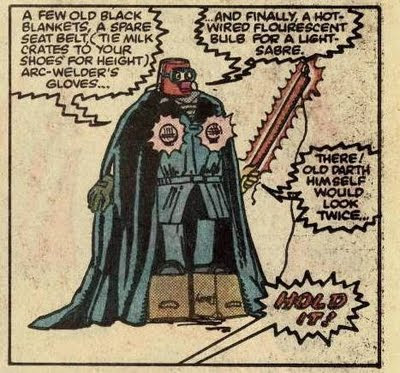 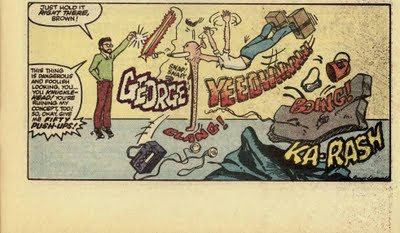 It's George Lucas!  Brown feels the wrath of The Force from the most powerful Jedi of them all! When I first read this, I thought Lucas might be violating one of the most important tenets of The Force.  Remember what Yoda said?:
"A Jedi uses the Force for knowledge and defense, never for attack."
But upon further review, I guess we can say that Lucas is "defending" his concept from Brown, so that makes it okay!
Thanks to Eliot R. Brown for writing and drawing a short but funny strip, and thanks to Lucasfilm for approving it.
Check back in a few days for 'Iron Man:Shame Of The City!'
Posted by J.A. Morris at 3:14 PM