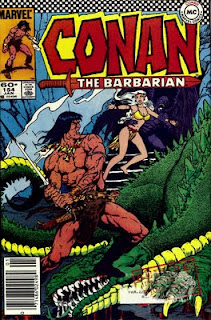 Now it’s time for a trip to Cimmeria, during the Hyborian Age, as we take a look at ‘Conan The Barbarian’ #154.
Our Assistant Editor for this title is Jim Owsley, he was Larry Hama’s Assistant at the time.
Owsley has had a long career as a writer and editor for the Marvel, DC and Acclaim comic companies. He was the first African-American writer and editor in comics, and became a Marvel editor at the age of 22, making him the youngest in the business. He was also one of the founders of Milestone Media.
In the 1990s, he changed his name to Christopher J. Priest and has continued to work in the industry. He’s also an ordained Baptist Minister. For more info on him & his career, check out Priest’s website here


As for Conan #154, you’ll notice that the cover has a circle that says “MC” inside it.

That's an homage/parody of the old "checkerboard" logo DC Comics used in the 1960s.

Inside, instead of a traditional splash page, we get a “Special Edition” of 'The Hyborian Page, Conan's letters page. Owsley gives us an essay about ‘Caesar’s Commentary on the Gallic War’. By the third paragraph, he veers way off course and gives a funny review of ‘Jaws III’ (which was in theaters shortly before this issue was published). 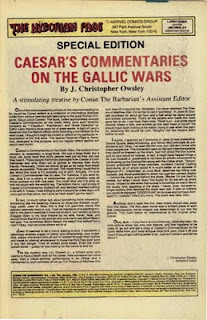 I’m not proud to admit that I saw ‘Jaws II’ in theaters, and I have to say that Owsley was correct here.

And now we get to this issue’s story, called ‘The Man-Bats Of Ur-Xanarrh!’ 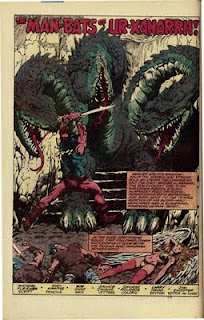 Like the cover logo, the title is a reference to The Batman of Zur-En-Arrh, a Batman from another planet who first appeared during the Silver Age.

I’ll admit that I’ve never been much of a Conan fan, only picked up a few issues here and there. But besides the title, I don’t notice anything funny or odd about this issue, just a typical "Conan vs. Bad Guys story". If any Conan experts happen to read this, maybe they can point out “offbeat” stuff about this story.

Very cool blog!! I'm a 80's Marvel comic fan, so this blog brings back some happy memories! Thanks!

Thanks for stopping by, I should have a new post up by tomorrow. Would've been up already but I'm having problems with my scanner.